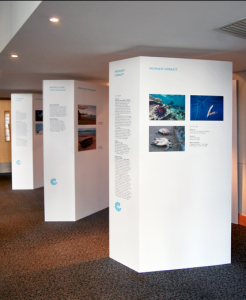 I  was commissioned through QUE Design Studio with the design, project management and curation of the Out of the Blue Photography Competition Exhibition, which was held in Malta during CHOGM 2015. The competition was open to all Commonwealth citizens, and was organised by The Prince of Wales’s International Sustainability Unit in collaboration with The Royal Commonwealth Society and National Geographic’s Pristine Seas Program, with the aim of highlighting the importance of the Blue Economy.

A preview of the exhibition had to be presented during the Youth Forum at San Antonio Hotel and the Business Forum at Hilton Malta before finally being set up for the awards ceremony at the Maritime Museum in Birgu, where HRH The Prince of Wales announced the overall competition winner. 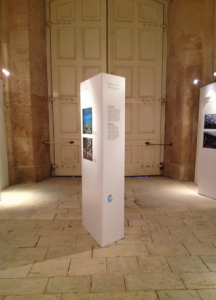 This created the challenge of designing an exhibition that could be easily transported, set up and dismantled and that could also be repositioned to fit the three distinct layouts. Additionally the design of each display panel had to incorporate a substantial amount of text that was central to the meaning of each photograph and category, and that had to be displayed in relation to each image.

In response to these parameters, a triangular structure was devised which could be exhibited in three different config

urations: a singular panel standing against a vertical surface, two panels fixed back-to-back to create a standalone module, or three panels attached together in the form of a convex hexagon.

The angle of each panel made it possible to display the images separately to the text by having the photographs on the wider face and the corresponding text on the narrower one. This enabled the viewer to appreciate the photographs without the text from one angle while viewing both simultaneously when standing directly in front.

Graphic design of the exhibition panels was done in collaboration with Design by Victoria, the brand designer of the Out of the Blue Photography Competition, based in London.

+There are no comments