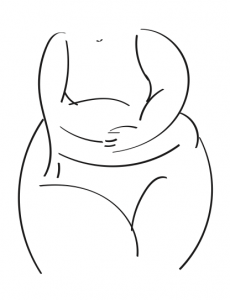 I have come to an understanding that what we believe about our past, shapes our
view of who we are as humans, and how we live.

While researching prehistoric sculptures and art objects from a creative and
feminine perspective, processing information through visual language and
academic publications, I have developed an understanding of historiography from a predominately intuitive standpoint.
Fat, fertile, mother earth, Goddess, and Venus are among the many names given
to the prehistoric art figures found around Malta and Gozo.

This perspective potentially changes radically if we assume that these objects were made by women.
In a female-centred culture rather than a male-dominated one, we can imagine a different life balance connecting the spiritual with nature.
When viewed from high above, the prehistoric temples of Maltese Islands tend to
have a very similar shape to the female figures that have survived for millennia. 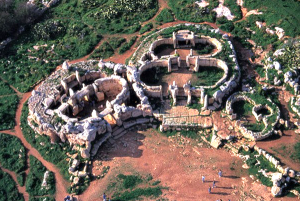 Close observation of the relevant artefacts held by Heritage Malta and in other
collections around the world led me to believe that Neolithic women had a rather broad understanding of their body types and life cycles. This is possibly one
reason why there are many headless figures and plenty more heads. Where the specific heads positioned on the body figures? 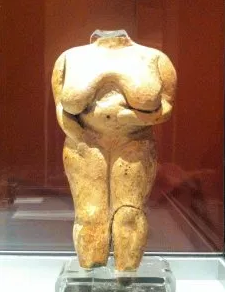 A particular example of these figures represent women going through pregnancy. On close inspection, it is evident that some of the surviving figures show different stages and specific aspects of pregnancy; the way their hands are placed and their sitting posture, slouching completely, drawing themselves upwards, accentuating the curve of the back as far as possible, distributing their entire body weight on both hips.
Only women who have experienced such things in their own bodies can pass on this level of detailed information through art.
The hard evidence is greater than what I’m presenting here, of course. In this first phase of my artistic creation based on this concept I will focus on some of the ways I believe that prehistoric women expressed themselves artistically while teaching others in their society about their life experiences as women.
How is this relevant in our time? I am addressing this question by shifting the main material used to plexiglass, which is a medium I have worked with extensively for over 12 years.

Coming soon as part of Art+Feminism 2020 at Spazju Kreattiv